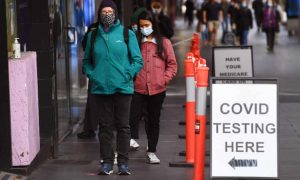 Victoria has recorded two new locally acquired cases of coronavirus, with around 83 active cases in the outbreak.

Both new cases are linked to the current outbreak.

One is a child linked to the West Melbourne outbreak, and the other is a close contact of a case at Arcare Maidstone.

The child diagnosed yesterday is a student at North Melbourne Primary School, but is in a different year level to two previous cases identified at the school.

A large number of contacts at this school have now been upgraded from Tier 2 to Tier 1, meaning they must get tested and quarantine for 14 days.

The COVID-19 vaccination hub at the Melbourne Convention and Exhibition Centre has also been listed as a Tier 3 exposure site for between 3:15pm and 4:00pm on June 7.

Mr Weimar said the person went to have a COVID test and then presented at the vaccination centre, but was told to leave and isolate.

Mr Weimar said he was confident there was no wider risk to the public.

Advice for Tier 3 sites is to monitor for symptoms.

Acting Premier James Merlino said one of the “missing pieces” of the puzzle had been the origins of the Delta outbreak and authorities had been running genomic sequencing to try to identify the source, likely in hotel quarantine.

“I can confirm today that we have now found a match between a returned traveller who entered hotel quarantine in Melbourne on the 8th of May and this cluster,” he said.

“While we have a genomic link we do not currently have an epidemiological link, further investigations are underway to see if we can establish any contact between the returned traveller and these families.”

The returned traveller arrived in Melbourne from Sir Lanka and immediately tested positive for COVID-19.

“While we are continuing to review CCTV and incident logs again, I can also confirm that so far there is no reported or obvious breach of infection prevention control protocols or anything else that would indicate a transmission has happened inside the hotel,” Mr Pearson said.

Deputy Chief Health Officer Allen Cheng said health authorities were investigating four possible scenarios that could explain how the man was linked to the current outbreak:

Professor Cheng said the man was correctly tested and cleared when he left hotel quarantine.

“However, we’re still following up the contacts of this gentleman after his discharge to make sure that there was no transmission after that,” he said.

All 12 residents who had been on the same floor as the man in quarantine had also returned negative tests before being released, and at least 10 of them had a post-discharge swab which was negative.

Professor Cheng said the discovery of the Delta source in Victoria had also clarified the likely sequence of events in the West Melbourne outbreak.

“We had been working on the likely scenario that the family that had been in Jervis Bay had been the first case in this outbreak,” he said

“This finding does suggest that perhaps it might have been the other way around. We can’t be completely sure at this stage, but we’re also investigating the possibility that the second family was actually the first to get infected and then have transmitted it to the other family.”

The results reported today were detected among 22,814 tests processed on Monday, as the state delivered 21,192 vaccination doses at state-run sites.

Victoria ‘on track’ to ease restrictions

The Melbourne lockdown is due to end at 11:59pm Thursday, and Mr Merlino today said the authorities were “on track” to announce an easing of restrictions.

“Our contact tracing team has done exactly what we needed them to do. They have found the cases, they have tracked them down and they have isolated them,” he said.

Mr Merlino said “nothing about today” changed those plans.

The health department recorded eleven new cases on Sunday, but many of those were people already isolating, and all were linked to known cases.

Several children are among the cases in the West Melbourne cluster, but University of Melbourne paediatrics Professor Fiona Russell said there was no need to expedite the vaccination of children.

“In the context that we’ve got a global shortage of vaccine when most frontliners haven’t even vaccinated, you have to really go through due process in terms of what the benefits are and the direct benefits to children versus the risk,” she said.

“It may be in some point in the future we may need to vaccinate children, but we’re not there yet.”

Several Melbourne shops have been added to the list of more than 300 exposure sites, including an IGA supermarket in Southbank and 7-Eleven stores in Yarraville and Maribyrnong.

Victoria’s Tourism and Major Events Minister, Martin Pakula, said there were positive signs ahead of a ruling later this week on whether Melbourne’s lockdown would be eased.

“So those things are positives, but we’ll continue to asses between now and when the decision point is, which will be on Wednesday or Thursday.”

Mr Pakula said he expected crowds to be allowed at AFL games in Melbourne when the current lockdown was eased.

“I don’t expect that we will be going back to 85 per cent [capacity] or anything of that nature, but I do expect that we’ll have AFL games back in Victoria sooner rather than later,” he said.