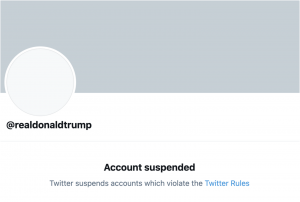 Donald Trump has been “permanently suspended” from Twitter, effective about 6pm on Friday local time, amid concerns he’s seeking to “inspire” more violence akin to the assault on the Capitol several days ago.

Mr Trump posted two tweets earlier on Friday in which first he said he would not be attending Joe Biden’s inauguration on January 20. In the second tweet, Mr Trump called the people who voted for him in the election “American Patriots” and said they “will have a GIANT VOICE long into the future”.

“These two tweets must be read in the context of broader events in the country and the ways in which the President’s statements can be mobilised by different audiences, including to incite violence, as well as in the context of the pattern of behaviour from this account in recent weeks,” it said.

While not unexpected, it is still significant. Trump had more than 80 million followers. Trump gained 166,073 Twitter followers on Wednesday alone, according to Factba.se, a platform archiving the president’s online activity, according to a report by Newsweek.

“After close review of recent Tweets from the @realDonaldTrump account and the context around them — specifically how they are being received and interpreted on and off Twitter — we have permanently suspended the account due to the risk of further incitement of violence.

“In the context of horrific events this week, we made it clear on Wednesday that additional violations of the Twitter Rules would potentially result in this very course of action.

“Our public interest framework exists to enable the public to hear from elected officials and world leaders directly. It is built on a principle that the people have a right to hold power to account in the open.”

Twitter also said that “we made it clear going back years that these accounts are not above our rules entirely and cannot use Twitter to incite violence, among other things. We will continue to be transparent around our policies and their enforcement”.

In addition, Twitter said “Plans for future armed protests have already begun proliferating on and off-Twitter, including a proposed secondary attack on the US Capitol and state capitol buildings on January 17, 2021.”

Twitter also suspended Ron Watkins, the administrator of fringe message board 8kun, which effectively serves as home base for the QAnon conspiracy movement.