A man has managed to capture one of the most venomous snake species in Australia two days in a row.

The residents of a two-storey home in Oakey, a town in Toowoomba, Queensland, were left terrified after coming across a massive blue-bellied black snake.

They called Gunter, a local snake catcher, to help remove the invading reptile from one of the bedrooms.

Gunter managed to catch the venomous snake late on Saturday night and move it out of harm’s way. 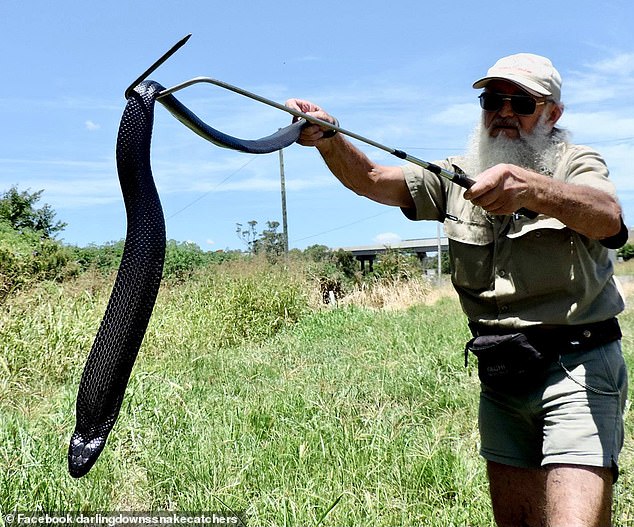 Local snake catcher Gunter was called to remove a massive blue-bellied black snake from a home in Oakey, Queensland

The next day, Gunter was called to another home in Oakey with reports that a snake was spotted in the backyard.

‘When I arrived, the lady said it had gone into the neighbours yard,’ Gunter wrote on his Facebook page Darling Downs Snake Catchers 24/7.

‘While I was talking to the home owners, in the backyard, it came back, only a metre from where we were standing. So it was an easy catch.

‘There must have been a reason for it to want to come back so soon. Usually they just tick off when they know they’ve been seen.

‘It’s biting my boot and didn’t want to let go.’ 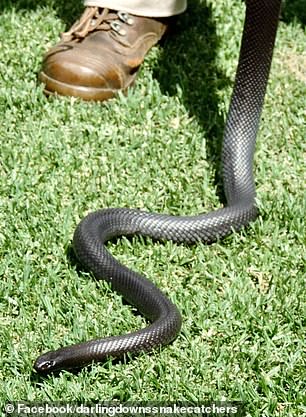 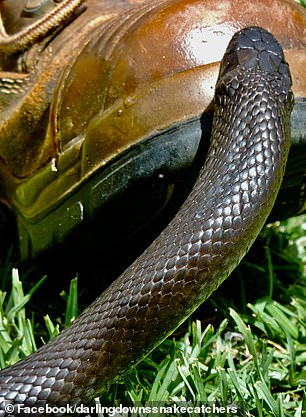 The next day, Gunter was called to another home in Oakey with reports that a snake was spotted in the backyard

Blue-bellied black snakes come in a variety of colours but are often compared with the red belly species.

They can grow up to 1.5m in length and are found in a range of habitats in southeast Queensland and northeastern New South Wales.

If a human is bitten by a blue-bellied snake, the venom destroys our red blood cells and breaks down muscle tissue.

The damaged cells then travel to the kidneys which can result in the organ’s failure.

What are blue-bellied black snakes?

Blue-bellied Black Snakes are predominantly a shiny bluish- or brownish-black, with a dark bluish-grey or black belly.

Can be found in a range of habitats, from river floodplains and wetlands to dry sclerophyll forest and woodlands.

They shelter under fallen logs, in deep soil cracks or abandoned animal burrows, and also in dense matted vegetation.

The snake is mainly found just west of the coastal ranges in southeast Queensland and northeastern New South Wales.

The species eats a variety of vertebrates including frogs, lizards, snakes and mammals.

If a human is bitten by the blue-bellied snake, the venom would destroy the red blood cells and breaks down muscle tissue.

The damaged cells then go to the kidneys which can result in the organ’s failure.