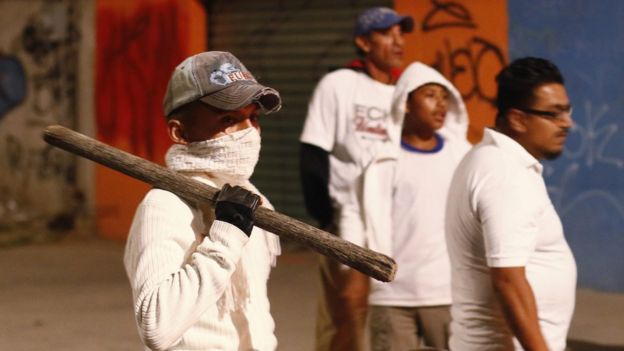 One of those killed was a serving police officer who had tried to halt robberies at a petrol station.

The government announced last month that it would stop subsidising petrol and prices would gradually increase through 2017. 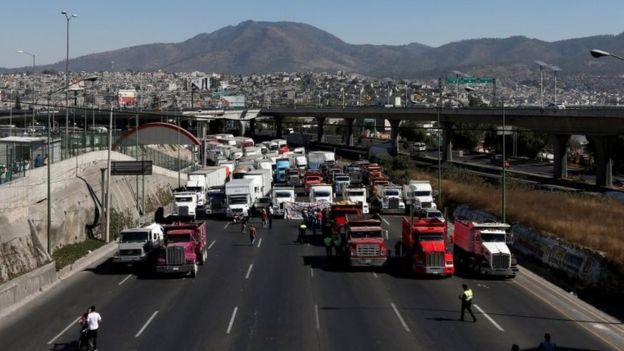 An increase of 20% came into force on 1 January.

That makes the average price of a gallon of petrol around the same as the daily minimum wage – 80 pesos ($3.77, £3.07) – and the raise has caused outrage among people dependent on petrol for their jobs.

President Enrique Pena Nieto has called for calm, saying the price hike is necessary after a rise in global oil prices.

In a televised address to the nation, he said keeping the subsidy would have put the country’s whole economy at risk.

He said raising the petrol price was a “difficult and unpopular but necessary decision”.

Traffic ground to a halt in Mexico City as transport workers and lorry drivers set up blockades. Protesters called for the president to stand down.

In the central town of Ixmiquilpan, two protesters died during clashes with police who were trying to clear a major road between Mexico City and Laredo.

In Veracruz, one person died after being hit by a lorry in which alleged looters were trying to escape the authorities, police sources said.

Hundreds of shops were looted, with some emptied of clothing, TVs and other consumer goods.

Some skirmishes have broken out between rioters and people who have armed themselves with planks, machetes and rocks in an attempt to prevent looting.

In Monterrey in northern Mexico, at least six protest marches convened on the state government’s palace in the centre of town. Gunfire erupted and some of the 10,000 protesters threw stones and broke stained glass windows.