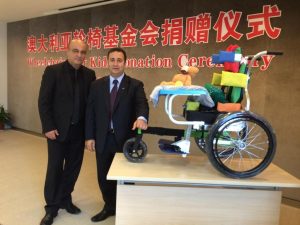 A Chinese-Australian man has been named as a member of a suspicious WeChat group in the warrant used by the AFP on NSW Labor MP Shaoquett Moselmane.
Natalie O’Brien, Senior Reporter, News Corp Australia Network.

A Chinese Australian man named as a member of a suspicious WeChat group in the warrant used by the Australian Federal Police to raid the home and offices of NSW Labor MP Shaoquett Moselmane, was not raided or spoken to by police.
The man, who is one of 11 people listed on the warrant, has only been connected to Mr Moselmane through their charity work – raising money to provide wheelchairs for some of the world’s most impoverished children.

Others named on the warrant as belonging to the social media chat group at the heart of the foreign interference investigation, include a young Chinese journalist in Australia, Fei Fei.
She who wrote an English language story on the China Radio International news site last year recognising Mr Moselmane’s charity work with children and his 20 year relationship with China, starting with the establishment of sister cities.

The existence of the wheelchair charity, Wheelchairs for Kids, has not been revealed in any of the reports around Mr Moselmane, the people on the warrant, or the raids. Mr Moselmane’s staffer John Zhang who has been accused of acting in the interests of the Chinese state – without telling Mr Moselmane, has also helped with the charity.

Gerry Georgatis a human-rights activist who accompanied Mr Moselmane on one of his trips to China – and spent every day with him – said they did nothing but talk to people about helping children including providing wheelchairs for more than 150 children in the world’s largest orphanage in China.
Mr Georgatis, the founder of the Perth-based wheelchair charity, Wheelchairs for Kids said he approached Mr Moselmane in 2012 for help raising money.
“There was nothing suspicious and nothing political about our visit,” said Mr Georgatis.
“I have known Mr Moslemane for eight years. And I have asked a lot of him over those years in terms of fundraising for wheelchairs for disadvantaged children,” he said.

“We share a lot of the same causes – about human dignity. Between us we have shipped more than 4000 rough terrain wheelchairs to children around the world to Iraq, Lebanon, Syria Pakistan and China.”
Li Jianjun, one of the university lecturers and PHD students who has had his visa cancelled by ASIO also helped Mr Moselmane with the wheelchair charity and a visit to three wheelchair factories in China to negotiate the best price.

Mr Moselmane’s home and parliamentary office were raided by AFP officers in the early hours of June 26 this year. The warrant for those raids was only signed at 10pm the night before, yet he claimed that media were at his front door with the AFP when they arrived.
Lawyers for Mr Moselmane have demanded an investigation be launched into whether the Australian Federal Police, spy agency ASIO, or the office of Home Affairs Minister Peter Dutton deliberately tipped off the media ahead of police raids on the politician’s home.
Mr Moselmane said he was told during the raid he was not a suspect or a target yet “his home was made to look like “the epicentre of an international espionage ring”.
The Australian Commission for Law Enforcement Integrity, ASIO and its watchdog, the Federal Law Enforcement Ombudsman and the AFP professional standards have been asked to hunt down the person who revealed the sensitive police operational details – as well as Mr Moselmane’s address.

Sydney law firm, Prominent Lawyers, claimed the tip-off could only have “come from a member of the government or someone employed by the government.“
In the requests to the watchdog agencies, the letters said the attendance of the media “smacked of tactics that resulted in a gross and fundamental breach of privacy” for Mr Moselmane and his family.

“The invasion of his privacy was deliberate, calculated, and undertaken by those responsible to cause him humiliation … resulting in him being “held up to hatred ridicule, and contempt in the frenzied and frenetic attack on him as a result of their advance notice of his premises being searched.”
“ … It had the added aggravated feature of bringing the administration of justice into disrepute, the letters said.”
An AFP spokesperson said as the investigation remains ongoing, it was not appropriate to make any comment.