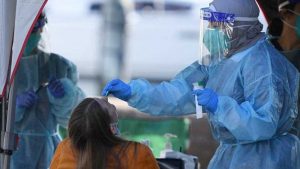 Queensland has recorded no new cases of COVID-19 overnight as the state continues the battle to contain the more transmissible UK variant of the virus.

“Very good news overnight. We have had zero new cases. So congratulations, everyone,” Premier Annastacia Palaszczuk told reporters on Saturday.

“Of course, we are monitoring the situation very closely over the next two days.”

Chief Health Officer Dr Jeannette Young, however, said the state had been notified by Victorian authorities late on Friday that a confirmed case had relocated to the state after also testing positive for the UK variant.

The woman arrived in Victoria from the United Kingdom on December 26 and completed hotel quarantine before she flew to Brisbane on Jetstar flight JQ570 at 11pm on January 5.

She was tested in Queensland on Friday and returned another positive result – but Dr Young said the risk is “extremely low”.

“The risk is extremely low because she is right at the end of her potential infectious period, and with a normal variant, we would not be at all concerned,” Dr Young said.

The woman is now in isolation at home with her parents at Maleny on the Sunshine Coast.

On Friday, the premier announced Greater Brisbane would enter a three-day lockdown after a cleaner at a quarantine hotel was diagnosed with the highly-infectious mutant strain.

Authorities fear the cleaner, a woman aged in her 20s, had been infected and active in the community since January 2.

Residents in the council areas of Brisbane, Logan, Ipswich, Moreton Bay and Redlands must stay at home until 6pm on Monday, except for essential work, exercise, essential shopping and to access healthcare or to look after the vulnerable.

The three-day lockdown prompted panic buying on Friday as massive crowds flocked to supermarkets stripping shelves of toiletries, perishables and canned goods with lines stretching for hundreds of metres at some stores.

Masks also will be mandatory for people leaving home aside from children under 12 for the first time in Queensland.

Queensland pushes on for Gabba Test

The Australian cricket team says they will go where they’re told for the fourth Test as Brisbane’s hard lockdown failed to alter plans for the city to host the series finale.

There was already rampant speculation that India will refuse to travel to Brisbane for the final chapter of the four-Test series, wanting to avoid strict biosecurity protocols.

Cricket Australia was locked in talks with the Queensland government and the Board of Control for Cricket in India (BCCI) on Friday, keen to maintain the current schedule.

Queensland Cricket noted in a statement that grade cricket and other fixtures in Brisbane this weekend had been cancelled but the Gabba Test was not impacted.

Friday’s announcement won’t affect the rules governing the Australia and India squads if they do land in Brisbane.

The restrictions placed on Brisbane residents during coming days will not be as tight as those confronting Test cricketers.

Nonetheless, the development will do little to ease angst within India’s camp.

The Test is slated to start on January 15, meaning the prospect of a heaving crowd at the Gabba for the series finale is now essentially over.