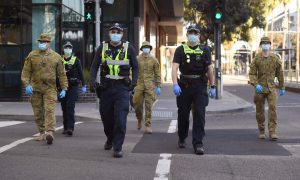 Victoria has recorded another six local COVID-19 cases, bringing the cluster in Melbourne’s north to 15.

The Department of Health had reported 10 new local cases in the 24 hours to midnight, and Acting Premier James Merlino revealed another case had been identified on Wednesday morning.

Mr Merlino said all of the new cases were close contacts of the cases that have already been identified as part of the City of Whittlesea cluster.

“It’s good that everyone is linked at this stage, but we are concerned about the number and also about the kind of exposure sites and the next 24 hours are going to be critical,” he said.

Mr Merlino said he could not rule out further restrictions in response to the outbreak.

“I want to be upfront with everyone this morning, I cannot rule out taking some further action but we’ll update people as soon as we know.”

There are now 23 active cases of the virus in Victoria.

The health department received 26,180 test results on Tuesday, and 15,858 doses of vaccine were administered, which is a record for Victoria.

Health Minister Martin Foley said 301 primary close contacts had been identified as of last night, with about 80 negative results returned from them so far.

He said many of the sites recently listed were Tier 1 sites, and of particular concern were three bars attended by a case on Saturday night in South Yarra and Prahran:

Anyone who was at those sites during the listed periods must get tested immediately and quarantine for 14 days.

Chief Health Officer Brett Sutton said it was too early to say whether more restrictions would be recommended to combat the outbreak.

“The next 24 hours will tell us if we’ve got further confirmed cases in the primary close contacts, 300 of which are known and only 80 of which have returned results so far,” Professor Sutton said.

“Almost all of the remainder will come through today, but the exposure sites that they generate … they’re all factors that we need to consider.”

Professor Sutton said any lockdown would be broad rather than localised in the city’s north.

“We’ve got significant spread of exposure sites at the moment, so it’s not something that we would look to at a postcode level I think,” he said.

Professor Sutton said the outbreak did not mean the state’s vaccination scheme needed to be accelerated.

“The issue now in Victoria is people coming forward to get the vaccine,” Professor Sutton said.

“We’ve got the supply, we’ve got the infrastructure to deliver it, we want people to book in, to walk in and to get the vaccine.”

The state government earlier this week flagged the possibility of expanding eligibility criteria for vaccines in Victoria, and Mr Merlino today reaffirmed he would “have more to say on that shortly”.

Testing capacity to be expanded amid long queues

“We look to build on the increase of 30 per cent of capacity yesterday with further key sites being expanded today.”

People were being turned away from testing centres in Deer Park, Mernda, South Melbourne, Boronia, and Epping because the centres had reached capacity.

The health department has added Docklands Stadium as an exposure site due to a positive case attending the Essendon vs North Melbourne game on May 23.

Anyone in those areas must get tested and isolate until they get a negative test.

Those with the closest contact will be given more specific advice from health officials.

Earlier, Mr Merlino praised the AFL for the preparation work that had enabled a swift response to a positive case who attended the Collingwood-Port Adelaide match at the MCG on Sunday afternoon.

“The AFL and the MCC have prepared for this moment, there’s been extensive work over a long period of time between our public health team and our stadium management,” he said.

“We’re very grateful that we had the data on hand very shortly after it came to our attention so that we could contact all of those individuals, have them test and isolate until they receive a negative result.”

Essendon, Carlton and Hawthorn will depart earlier than scheduled for weekend matches interstate.

The AFL said players at all clubs will be tested and minimise their movements until they travel.

Mr Merlino said he would like to see more urgency in the establishment of a purpose-built quarantine hub in Mickelham.

He noted the current outbreak in Victoria could be traced to hotel quarantine failures in South Australia.

The Victorian government is seeking at least $200 million of federal government funding to create the centre in Mickelham, on the proviso the state would run it.

“The discussions between our two governments are proceeding very, very well but … there is a sense of urgency about this,” Mr Merlino said.

“We are very, very keen to finalise those discussions with the Commonwealth and have the Commonwealth provide the green light — one, in terms of access to the site so we can crack on and do the planning and the design work, and secondly, commit to the funding of its construction.”

“This is a comprehensive proposal which is excellent and what we need,” she said.

“But we will do our own due diligence, we will work with the Victorian government and we will try and bring this to a conclusion as quickly as we possibly can.”