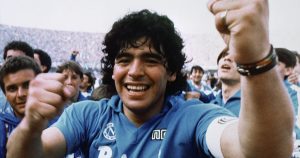 Football legend Diego Maradona has died from a heart attack at the age of 60.

The death of the former Argentinian player sent shockwaves across the world following the devastating news.

The news broke early on Wednesday morning with football players and fans alike mourning the loss of the star.

Maradona’s coffin was taken to the presidential palace in Buenos Aires and was covered with the Argentinian flag and Boca guernseys.

He will be buried on the outskirts of Buenos Aires in the Jardin de Paz cemetery, where his parents were also buried.