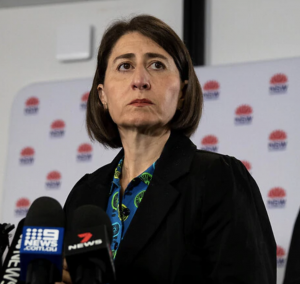 The NSW Premier says no student should be allowed to take a weapon to school, despite a law that allows them to do so, following a school stabbing in Sydney’s north west.

A 14-year-old boy is facing serious charges after allegedly stabbing a 16-year-old boy with a “religious knife'” at Glenwood High School on May 6.

Mobile phone footage shows the year 11 student holding his stomach as friends helped him through the playground after the attack.

He was hospitalised and is now recovering at home with his family.

Principal Sonja Anderson moved to reassure parents that their children are safe despite dozens of students witnessing the attack during their lunch break.

“Schools in NSW are among the safest places in the community, and Glenwood High School is one of those schools,” she said.

The letter makes reference to the Summary Offences Act, in which a person is allowed to carry a knife in public, provided he or she has a “reasonable excuse”.

“The possession of a knife for genuine religious reasons is specified as a reasonable excuse under the act,” Ms Anderson said.

“However, any knife or implement used as a weapon in a dangerous, violent or threatening way is never acceptable.

“We are currently working with the department and community representatives to discuss how best to enable students to meet aspects of their religious faith and, at the same time, to ensure our school remains a safe place.”

Ms Berejiklian said she was quite “taken back” to learn that students are able to carry knives into schools on religious grounds.

“Students should not be allowed to take knives into school under any circumstances and I think it doesn’t pass the common sense test,” she said.

“Even if they’re not using weapons, others might take them from them so I was very taken back when I learnt that.

“I will be speaking to the Education Minister about it. My strong view is that no student should be allowed to take a weapon to school, full stop.”

The Education Minister Sarah Mitchell said she has discussed the issue with the Attorney-General to see what can be done to ensure schools remain safe.

“Student and staff safety has to come first and that’s why I have asked for advice on that — I think we need to look at that exemption and if there is more we need to do,” she said.