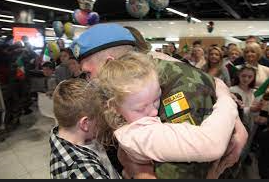 Families began arriving at Dublin airport early this afternoon to welcome back troops from the 120th Battalion – who had been deployed in May to South Lebanon.

A piper played Christmas carols as people waited excitedly for the arrival of flight DB3012 from Beirut.

They included brother and sister Erica (7) and Adam (9) who had made homemade signs to welcome back their dad, Sergeant Dean Hickey.

Greeting them both with a hug and a kiss he said: “It’s after being a long six months. It’s been a really enjoyable six months and a busy six months. Lots of work done, but I’m just delighted to be back now with my family today and the families that are here waiting, the families at home, the loved ones really are the unsung heroes of the Defence Forces, they enable us to do what we go to do.”

Sergeant Denise Doyle was reunited with her daughter Erin who asked her if she would be putting up the Christmas decorations tomorrow in time for the Toy Show: “This is all I’ve been hearing, this is what she wants for the Toy Show, so that’s my day tomorrow,” she said.

This was her seventh mission abroad and she said she had been away on previous Christmases, so this one being at home would be special.