Joe Biden wins the US election 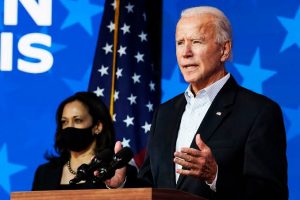 Joe Biden has won the US election against Donald Trump.

The Democratic leader will become the 46th president of the United States of America.

“I understand the disappointment tonight. I’ve lost a couple of times myself. But now, let’s give each other a chance,” he said on Saturday night.

“This is the time to heal in America.”

“While I may be the first woman in this office, I will not be the last, because every little girl watching tonight sees that this is a country of possibilities,” she said.