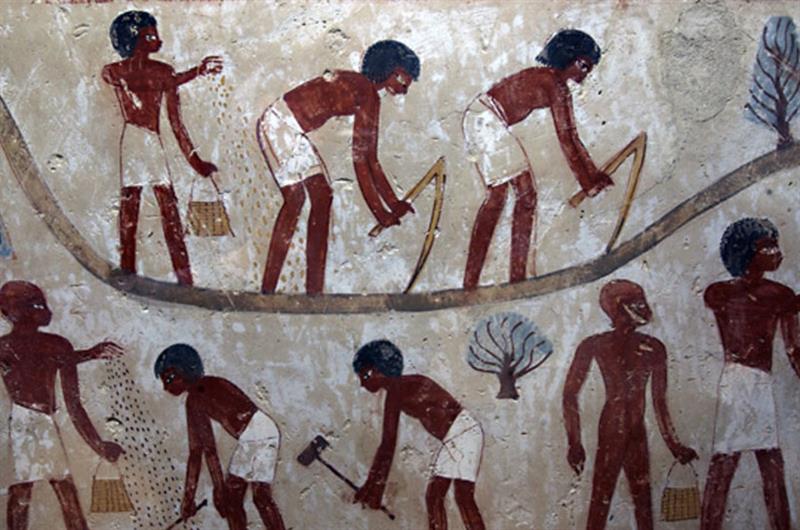 The ancient Egyptians laid the foundations for sustainable development by protecting the environment, growing sustainable food, and preserving renewable and non-renewable natural wealth, said Zahi Hawass, former minister of antiquities and a well-known Egyptologist, in an interview with Al-Ahram Weekly.

They were able to protect their natural resources, including water, soil, and air, and they had a concept of biological diversity that included birds, animals, and plants. They also preserved the water of the Nile from pollution as they worshiped the river. A person would not travel to eternity if he polluted the Nile’s water.

“Understanding the environment and the climate in which they lived was one of the main reasons of the success of the ancient Egyptian civilisation and its continuity for thousands of years,” Hawass said.

He explained that the Nile was the most important element in ancient Egyptian lives. It flooded every year, granting the land growth and prosperity and providing fresh water for every living creature.

If the floods were low, crops and livestock were affected, and the country was exposed to drought. Huge floods destroyed villages and land, however, and also led to famine. Therefore, the ancient Egyptians dealt scientifically with the Nile flood and organised the power of its water.

They dug canals to direct the water, preserving and making the best use of it, and they also constructed dams on the Nile and its branches.

“The ancient Egyptian understanding of the Nile was the core of their success in coexisting with it,” Hawass said, adding that the river was not only a source of water and fish, but also an ideal means of transportation for goods and products.

“The type and weight of the load had to have specific timing for its transport along the Nile,” Hawass said.

They admired the environment around them and formed their religious rituals from it. Their reverence for these elements and their linking them to the deities of the air, wind, and sun deepened their belief that the only way to live was in harmony with the environment and not in hostility to it.

They respected the Nile and its floods and built their houses on high land from natural materials such as silt, reeds, wood, and palm trunks.

They did not waste materials, but everything had a function and a use. Any surplus from the household went to feeding domestic animals and birds. Fishing was done using a specific type of net that caught only large fish and let small ones go. In the images that have come down to us, the ancient Egyptians are shown slaughtering only calves and bulls, never cows, in order to preserve their natural wealth.

Even scenes of hunting in the desert maintained an ecological balance.

“The Pharaohs were the oldest geologists on earth. They studied the layers of the earth and knew the characteristics of each and its advantages and disadvantages and how the minerals could be used,” Hawass said.

They opened gold mines in the Eastern Desert and Nubia and employed every mineral for jobs that best served their lives and beliefs. They described what nature gave them as a gift that should be thanked for. One of ways to thank the gods for their blessing was to preserve resources and not to waste them.

Hawass said that the ancient Egyptians never disposed of dead animals in an inappropriate way or polluted the Nile. Cutting down a tree or destroying a plantation was also a crime, even if done by an enemy.

The ancient Egyptians were the first people to apply adaptation measures to nature, said Mustafa Waziri, secretary-general of the Supreme Council of Antiquities (SCA). He said that they established flash flood drains to protect archaeological areas, built dams during floods, and planted trees to produce oxygen more than 4,500 years ago.

Along the same lines, since 2005 the SCA has conducted several projects to protect Egypt’s archaeological sites. It has carried out projects to lower the ground water level at the Karnak and Luxor temples, as well as the Temple of Habu, the Ramesseum, and the Seti, Amenhotep II, Kom Ombo and Edfu Temples in Upper Egypt.

The SCA succeeded in lowering the groundwater level in the Kom Al-Shoqafa Catacombs in Alexandria, he said, and a few years ago it started to operate electric buses at archaeological sites such as in the Valley of the Kings and Deir Al-Bahari in Luxor, the Abu Simbel Temples in Aswan, and the Salaheddin Citadel in Cairo.

Waziri said that the ministry was also implementing a plan to transform museums and archaeological sites in Egypt into green sites that rely on solar energy as a sustainable and more economically feasible alternative to standard electrical energy. This would contribute to preserving the cultural heritage and to its protection, rehabilitation, and utilisation in achieving the UN Sustainable Development Goals (SDGs), he said.

To highlight the ancient Egyptian efforts to protect the environment, the Sharm El-Sheikh Museum in South Sinai had organised a 30-day temporary exhibition entitled “Egypt and its Environmental Legacy” on the fringes of the COP27 Climate Change Conference.

The exhibition displays a collection of 20 artefacts highlighting the role of the ancient Egyptians in preserving the environment and its different elements as well as showing the importance of the Nile as the life-giver of ancient Egyptian civilisation.

Among the exhibited objects are three items showing the monotheistic Pharaoh Akhenaten and his family. The first is a bust of Akhenaten wearing the crown of the air deity, the second is a painting depicting him along with his family presenting offerings to deities while worshipping the sun god Atun, and the third is a painting of the king along with his wife Nefertiti.

Two reliefs of the Nile god Hapi in human form and a necklace made of faience decorated with floral motifs are also among the objects on display.

Miriam Edward, supervisor of the Sharm El-Sheikh Museum, said that the ancient Egyptians sanctified the Nile and called it “Itro-Aa”, meaning the “Great Nile”. From this, the word “Nile” was derived, meaning “river with branches”.

The main deity of the Nile was the god Hapi, who was depicted in human form. He was a centre of fertility, and he carried in his hands flowers, birds, fish, vegetables, fruit, and palm fronds, and sometimes wore a lotus flower in Upper Egypt and a papyrus flower in Lower Egypt.