Hunt for man who punched five-year-old in the face 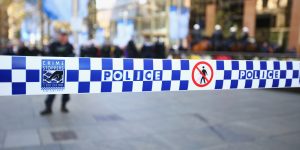 A hunt is underway for a man who punched a five-year-old boy in the face.

The child was with his older brother and grandmother in Glebe, south-west of Sydney’s CBD about 4.20pm on Tuesday when he was attacked.

The children were walking while holding on their grandmother’s hand when the man, who is unknown to them, punched the five-year-old boy in the face.

The young victim fell to the ground and suffered some bruising to the chin but luckily did not require any medical assistance.

Police are now on the lookout for the man they believe is responsible for the attack.

He is described as being about 170cm tall with a thin build and dark complexion.

He has a long face with dark beard and short dark hair.

When he attacked the young child, he was wearing a dark coloured hooded jumper, dark long pants and joggers.