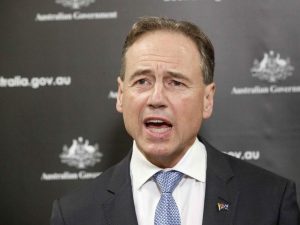 Health Minister Greg Hunt has rejected concerns about the COVID-19 tests being used by Qantas in India to screen passengers trying to return to Australia.

The ABC revealed a lab that tested passengers before the weekend’s flight had its accreditation suspended in April, sparking other Australians trying to get home from India to call on the company to reconsider its testing protocols.

Almost half of the passengers bound for Australia on the first repatriation flight from New Delhi to Darwin on Friday were barred from travelling, either because they tested positive for the virus or were close contact of someone who did.

At least 10 people who initially tested positive returned a negative test within days.

“[Qantas has] identified a large number of positive cases that would otherwise have come to Australia,” Mr Hunt said.

“Our understanding is the Qantas process is strong and rigorous.”

Opposition Leader Anthony Albanese accused the government of shifting the blame to Qantas.

“Scott Morrison needs to take responsibility for something, but in this case he’s handed off to Qantas,” he said.

“He’s handed over quarantine responsibility to the states, he also, with regard to people stranded in India, he’s now blaming Qantas.

“Because of a false test, they’re still stranded in India.”

Mr Hunt also revealed Australia’s troubled vaccine rollout was beginning to pick up pace, with the latest data showing another million doses had been administered in the last 17 days, down from nearly seven weeks for the first million.

More than three million doses have now been handed out, according to Commodore Eric Young from the Vaccine Operations Centre.

Commodore Young said a new record was set last week for the number of people vaccinated, with 436,000 doses administered.

“That included a record day last Thursday of 83,495 doses administered in a single day,” he said.

Commodore Young said 76 per cent of vaccine supply sent to state and territory governments had been used.

The vaccine rollout has been plagued by supply issues and the change in advice for people under 50 to receive Pfizer instead of AstraZeneca as the preferred vaccine.

As well as praising the progress of the rollout, Mr Hunt also suggested states and territories might decide to allow free movement for people who are vaccinated — a move that could provide a strong incentive for those unsure about receiving a jab.

“Where there are outbreaks or issues relating to state borders, there is potential of people who are fully vaccinated to be exempt from those restrictions,” he said.