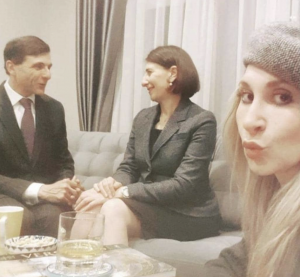 NSW Premier Gladys Berejiklian is reportedly in a new relationship, with her sister uploading a picture of her and a high-profile Sydney lawyer.

Ms Berejiklian has recently started dating Arthur Moses, SC, the lawyer who represented her at a corruption hearing into her former partner Daryl Maguire.

A spokesman for the premier confirmed that the couple had recently started seeing each other.

“They have recently begun spending private time together. The Premier will not discuss her private life,” the spokesman said.

It comes after Ms Berejiklian’s sister, Mary, posted a photo of the pair on Instagram.

“After work Friday feels with these two. Glad and her boo,” she captioned a picture showing Ms Berejiklian and Mr Moses smiling and looking at each other.

According to The Daily Telegraph, rumours about the couple’s budding romance have been swirling for months after they were seen by some ministers having coffee and visiting her office.

Mr Moses served as president of the NSW Bar Association and president of the Law Council of Australia and is currently representing Ben Roberts-Smith in his defamation case against Nine newspapers.

He was Ms Berejiklian’s lawyer when she appeared before the Independent Commission Against Corruption (ICAC) last year where it was revealed she had been in a “close personal relationship” for five years with former Wagga Wagga MP Mr Maguire.

Mr Moses is no longer her legal counsel.

Mr Maguire was caught up in the ICAC probe after he was secretly recorded discussing property deals involving a Chinese developer over the phone.

He resigned shortly after publicly testifying before ICAC in July 2018.

Ms Berejiklian said “it wasn’t pleasant” having her personal life splashed in front of a corruption hearing.

“But I think people who have been in my position or have had similar positions would appreciate, you very much have to distinguish the personal from the public. And it’s really important to make sure you don’t get distracted from the job you have to do,” she said at the time.

“In that case (the personal and the public) kind of merged.”