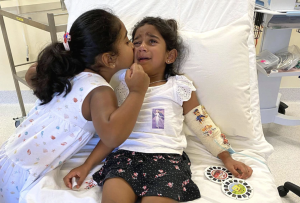 Family friends of a Tamil asylum seeker family in immigration detention on Christmas Island say they are concerned about how long it took authorities to address the suspected serious illness affecting the youngest child.

Three-year-old Tharnicaa Murugappan was flown to Perth Children’s Hospital last night after being sick with vomiting, diarrhoea and dizziness for several days.

Legal representatives said both parents, Priya and Nadesalingam, also known as Nades, lobbied for the whole family to go to hospital with their Australian-born daughter but the request was denied.

Family friend Angela Fredericks said she spoke with Priya and Tharnicaa via videocall on Monday night and that the girl on had been diagnosed with sepsis, a life-threatening blood infection.

Ms Fredericks said on Tuesday it was understood Tharnicaa was being treated for pneumonia, which was believed to have caused the blood infection.

“My blood was absolutely boiling just listening to the family’s treatment by the staff at the detention facility,” Ms Fredericks told ABC News Breakfast.

“The medical officers that are purely there to look after this family at that detention facility, failed in their responsibilities.

“Any other parent would have had their child up at a hospital and that’s exactly what these parents wanted to do and they were stopped from doing that.

“On the weekend, she’d been asking for her to be taken to the hospital and she kept getting told no, she’s not bad enough, she’ll be fine.

“But a mother knows and they’d been taking her temperature, it wasn’t going down and it wasn’t until Tharnicaa was literally falling over that they finally got her to the hospital.”

Ms Fredericks said when they spoke, Tharnicaa was attached to a drip, receiving antibiotics.

“She was crying the whole time, asking for her papa,” she said.

In a statement, the Department of Home Affairs said it is committed to the welfare of detainees in immigration detention.

The department said healthcare services for detainees on Christmas Island are broadly comparable with those available within the Australian community under the public health system.

It said the Australian Border Force facilitates access to nurses, doctors and specialists for all members of the family.

Another family friend, Simone Cameron, said the girl’s parents were pushing for staff at the detention centre to do more than supply paracetamol, but their requests were not taken seriously.

“It really took until Sunday morning, 4:00am I think it was, that her temperature went to 40.7 degrees Celsius,” she said.

“They pushed some more — really put their foot down — and finally they took her to the Christmas Island hospital.”

“It’s distressing that there are reports that medical care was delayed in this case,” he said.

“It shows some of the challenges that even though they’re spending millions of dollars on this incarceration of this family on Christmas Island they still seem to be unable to provide proper medical care for children, innocent children, when they need it.”

He cautioned against the toddler being returned to Christmas Island.

“I think we should be having a long, hard think about whether in a psychological and social sense it is safe to discharge her from hospital back to the environment she came from,” Dr Miller said.

“This was setup to happen by having little children living in an isolated location in lockdown conditions.”

Renewed calls for family to be released from detention

The family have been at the centre of a long-running legal stoush with the federal government over their deportation to Sri Lanka.

Tharnicaa and her older sister Kopika were both born in Australia.

Their parents came to Australia separately by boat in 2012 and 2013.

In 2018, Australian Border Force officials took the family from their home in Biloela in central Queensland and placed them in custody after their visas expired.

They have been held on Christmas Island since August 2019.

Shadow Minister for Home Affairs Kristina Keneally called on the federal government to let this family return to Biloela.

“The Minister for Home Affairs should explain this situation but more importantly and more urgently she should let this family come home to Biloela,” she told ABC News Breakfast.

“I don’t understand why we can’t show just an ounce of compassion and let this family stay together during what must be an incredibly traumatic, difficult time.

“She’s the sweetest little child, she is cheeky and lovely and so well behaved. And I just cannot imagine why any minister isn’t letting this family come home.”