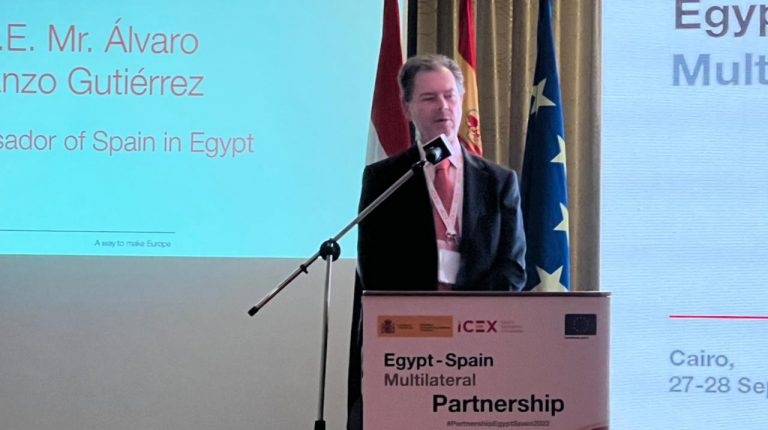 Newly appointed Spanish ambassador to Egypt, Alvaro Iranzo Gutiérrez,​​ said that the challenges that the world, in general, and Egypt and Spain, in specific, are facing are huge. He continued that he has the feeling that Egypt and Spain have not fulfilled the full potential of their relationship and this is the time to do it.

“It’s always the right time. It’s never the right time, because of course, as we are navigating through turbulent seas out of the international crisis that stems from the regrettable invasion of Ukraine by Russia, which has distorted international markets in different fields, created inflation and created food security problems, created disturbances in the energy market. Nevertheless, we understand the impact that the crisis is having in Egypt and Spain, but we still think that the best way to overcome these problems is through an intense effort, working hand in hand and understanding the situation particularly here in Egypt,” the ambassador said.

His remarks came during the second edition of the “Egypt-Spain Multilateral Partnership Forum”, which was held in Cairo on 27 and 28 September 2022. This conference is considered the biggest Spanish event organized in Cairo since the visit of the Spanish Prime Minister to Cairo last December, during which a joint declaration of financial cooperation was signed between Egypt and Spain, for €400m, to finance projects in Egypt. The first edition, which was held in Cairo in March 2017, was very successful and fruitful, where more than 320 participants attended the conference, including: Egyptian Ministers, heads of Egyptian public institutions, the main International Financing Institutions present in Egypt and the executives of the biggest Egyptian engineering companies in the construction and infrastructure fields.

The Ambassador continued that Spain believes that Egypt has a very solid and diversified economy.

“I’m glad to pre announce that more political meetings are going to come during the coming period, the highest possible level and we will continue to benefit from those political decisions, agreements are to be signed in all the different fields so there’s going to be a strategic support field,” Gutiérrez​ said.

He added that Spain and Egypt have naturally very important humane dimensions to their relationship, represented in people to people meetings and civil society conventions. He also mentioned that the tourist flows are always extremely important.

Gutiérrez​​continued that Egypt is considered also an important partner for Spain in the cultural field.

Notably, a high-level Spanish business delegation is currently visiting Cairo to discuss new trade and investment opportunities in Egypt. The delegation is headed by Xiana Méndez Bértolo, the Spanish Secretary of State for Trade.

Talking about the Spanish delegation’s visit to Egypt, the ambassador said that this is a proof of the Spanish governmental commitment to continue to set up opportunities to enhance the Egyptian- Spanish cooperation.

“Now is the time for all the actors on the ground to meet and devise new activities,” the ambassador concluded.