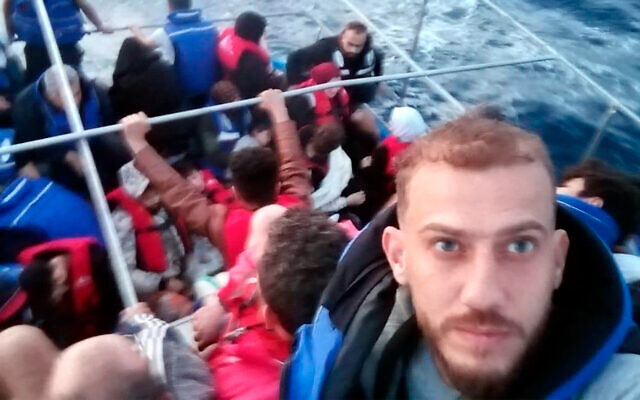 Economic catastrophe in Lebanon compels many to seek work in Europe, including chef Jihad Michlawi, who swam to Syrian coast after smuggler ship capsized

Jihad Michlawi struggled to make ends meet as a chef in crisis-hit Beirut. The Palestinian had never considered taking a perilous journey across the Mediterranean Sea to Europe until friends who did so persuaded him to try.

Now, he’s one of dozens of survivors from a capsized migrant boat that left Tripoli, Lebanon, last week heading toward Italy carrying some 150 Lebanese, Syrians and Palestinians.

“Some people who arrived told me that life in a European displacement camp was better than life in central Beirut, and that even the food was better,” Michlawi told on Tuesday.

The crowded boat capsized September 21 off the coast of Tartus, Syria, just over a day after departing Lebanon. At least 94 people were killed, among them at least 24 children. Twenty people survived and the rest remain missing.

It was one of the deadliest ship sinkings in the eastern Mediterranean Sea in recent years, as more and more Lebanese, Syrians and Palestinians try to flee cash-strapped Lebanon to Europe to find jobs and stability. The UN High Commissioner for Refugees says risky sea migration attempts from Lebanon over the past year have surged by 73%.

Lebanon’s economy has spiraled for a third year, with three-quarters of the population plunged into poverty and the Lebanese pound losing 90% of its value against the dollar.

Michlawi, 31, said he scraped together thousands of dollars and handed the money to a smuggler, whom he described as a “monster.” The Lebanese military has since arrested the smuggler.

Michlawi left the Lebanese capital for Tripoli at night, and a car with tinted windows drove him and five others to an orange grove, where he and dozens of others were crammed into pickup trucks covered with a tarp.

After reaching the coast and seeing the small boat that would carry them, many began to have second thoughts. “At this point we just thought we might as well go since we got there, but we probably should have considered the danger we put ourselves in,” he said.

The boat’s engine began stalling intermittently, but when it completely stopped the following day, the tide started rocking the crowded vessel, as the anxious passengers began to panic, Michlawi said.

Michlawi and the others tried to move around the boat to keep it from tilting. The large waves knocked Michlawi into the wall and onto the floor several times. Breaking glass pierced his left foot.

Then, a large wave knocked dozens of people off the boat and into the water where they drowned. Michlawi recalled seeing the body of an infant who he said was no older than two months. At that point, he and the others decided they ought to risk swimming for hours to get to shore.