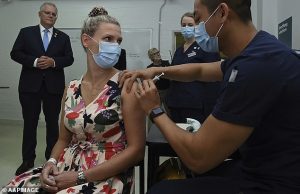 Australians over the age of 50 will be able to get the vaccine against Covid-19 from June, the federal government has finally revealed.

The 678,000 Australians included in the phase 1a rollout of the vaccine would have received their second dose by June.

From March 22, the rollout for the 6.1 million Australians under the phase 1b will begin receiving their vaccine.

This phase includes people over the age of 70, those with underlying medical conditions, other front line workers, Aboriginal and Torres Strait Islanders under the age of 55, as well as critical and high risk workers.

The Morrison Government enlisted thousands of GPs to administer the jabs across the country.

The program is run by the federal and state governments, targeting frontline health and hotel quarantine workers as well as aged and disability care residents and staff.

he plan will see up to four million Australians vaccinated by April 26 as GPs help administer doses.

Mr Morrison clarified confusion around his government’s vaccination deadline, saying he hoped all Australians would get one dose by October.

He said the move from four weeks to 12 weeks between recommended doses had blown out the promised timeline.

He defended the sluggish speed of the early-stage rollout blaming the international supply blockages for the delay.