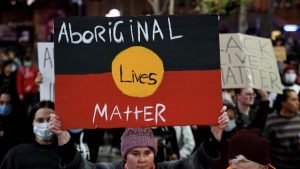 The death of an Indigenous woman in a crash involving a car being chased by Darwin police is being treated as a death in custody.

Officers say the woman was a passenger in a Hyundai Hatchback which crashed into another car after allegedly running a red light at a northern Darwin intersection about 2.30am on Sunday.

Emergency services tried to give the woman CPR after the accident but she died at the scene.

Detective Superintendent Peter Kennon says her death is being treated as a death in custody.

He says crime division detectives will investigate the case on behalf of the coroner with oversight from Professional Standards Command.

“This is a tragic incident for all involved,” Det Supt Kennon said in a statement.

The other three people in the car that crashed were taken to Royal Darwin Hospital for treatment.

The driver is being kept under police guard at the hospital.

The woman is the eighth Indigenous person to have died in custody across Australia since 2 March.

A 37-year-old man was found dead in his cell at Cessnock Correctional Centre in the NSW Hunter Valley on 27 April, just a day after a man died during an apparent medical episode at Port Phillip Prison in Melbourne.

In March, a man and a woman died in separate incidents in NSW prisons while a man died at Victoria’s Ravenhall Correctional Centre.

Barkindji man Anzac Sullivan, 37, died during a police pursuit in Broken Hill on 18 March and a 45-year-old man died while in medical care in Perth.

NSW Greens MLC David Shoebridge said in April the deaths were a national crisis and reinforced the urgent need for the 339 recommendations of the Royal Commission into Deaths in Custody to be implemented.

“Every First Nations death in custody is an inevitable result of the racist criminal justice system that results in First Nations people in NSW being the most incarcerated people in the world,” he said in a statement.

“The government is on notice and action is urgently required. It cannot be accepted that First Nations people routinely die in custody.”

More than 470 Indigenous people have died in detention since a 1991 royal commission report into Aboriginal deaths in custody.