Chinese ‘research’ ship is spotted off the coast of Australia 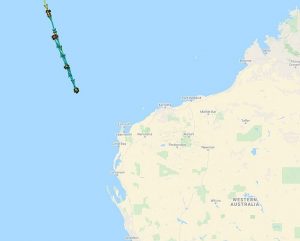 A Chinese research ship has been spotted off the coast of Australia.

Ryan Martinson, an assistant professor in Chinese Maritime Studies shared the movements of a vessel called Shiyan 3 off the coast of Western Australia on Twitter this week.

He posted a photo of the ship as well as a graphic that monitored its route along the coast since March 6.

Mr Martinson said the vessel is owned by the South China Sea Institute of Oceanology, Chinese Academy of Science.

In a follow-up tweet, Mr Martinson noted that the Chinese space tracking ship, Yuanwang 6, was also spotted nearby.

The sightings come just days before Australian Prime Minister Scott Morrison is set to meet with US President Joe Biden as well as leaders from Japan and India, known  as the ‘Quadrilateral Security Dialogue’.

The meeting will be held virtually early on Saturday morning Australian time.

China has called the so-called Quad an attempt to contain its ambitions.