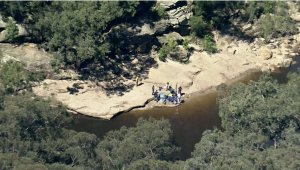 A young boy has died after he was found unconscious at a popular swimming hole.
The seven-year-old boy was found submerged at a popular swimming hole in the Blue Mountains.
He was initially with family at Jellybean Pool at Glenbrook when he went missing and they raised the alarm.
NSW Police found the boy in the Blue Mountains National Park about 2.20pm on Friday.
“The exact time he had been missing for is unknown,” NSW Ambulance’s Peter Van Praag  said.
“But approximately 20 minutes.”
Terrified family members helped pull the boy from the swimming hole as paramedics started CPR.
He was then taken to hospital where he unfortunately died.
“It’s an absolutely horrendous thing to happen to a family. It’s horrendous for the families that were there and witness the event,” Mr Van Praag said.