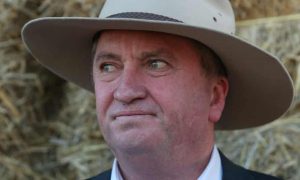 Deputy Prime Minister Barnaby Joyce has been fined by NSW Police for failing to wear a mask, in breach of public health orders.

Officers from New England Police District were called to a petrol station in Armidale after the tip-off that Mr Joyce was not wearing a mask.

Police confirmed that Mr Joyce was issued with a $200 fine at 8:00am on Monday.

Deputy Police Commissioner Gary Worboys said the fine was an example of police following up on all tips made by the public.

“That person was apologetic and cooperated with police being firm and fair,” he said.

“Police are rostered 24/7 right across the state and they will take action, and certainly the incident at Armidale is clear evidence that police will investigate and take action.”

Mr Joyce was recently returned to the position of deputy prime minister after a leadership challenge on former Nationals leader Michael McCormack.

He was accused of sexual harassment — a claim he strenuously denied.

It had also emerged that he had an affair with a former staffer.

That affair led to then prime minister Malcolm Turnbull introducing the so-called “bonk ban”, which made it against the ministerial code of conduct to have sex with staff.

A National Party investigation into the sexual harassment allegation was unable to make a finding into the matter.