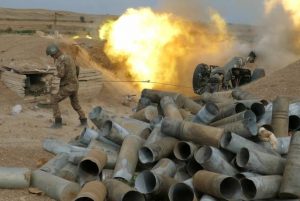 YEREVAN, OCTOBER 7, ARMENPRESS. President of Artsakh Arayik Harutyunyan wrote on his Facebook page about an excellent military operation carried out by the Defense Army of Artsakh.

‘’Thank to an excellent military operation by the Defense Army of Artsakh, it was possible not only to liberate one of the earlier lost positions, but to save the lives of 19 soldiers who, days before bravely confronted the enemy and instead of withdrawing, hid in a nearby forest, waiting for the counter-attack of our troops.

By the way, as a result of the operation the enemy suffered great losses of military equipment and leaving over 100 dead in the battlefield, withdrew’’,  ARMENPRESS reports, President Harutyunyan said.

Editing and translating by Tigran Sirekanyan