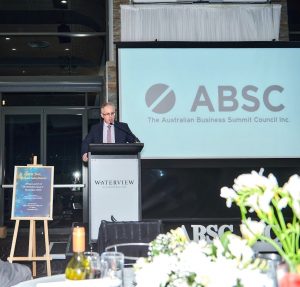 The Australian Business Summit Council Inc. hosted an exclusive Annual Gala Dinner to launch the second issue of EKONOMOS, the official business affairs magazine published by the association at The Waterview in Bicentennial Park, Homebush NSW on Thursday 3 December 2020.

More than ninety VIPs, diplomatic officials and guests convened in the Lake Room of the five-star reception venue to celebrate the notable achievements of this peak management consultant forum in what has been, due to the COVID-19 pandemic, an extremely difficult time for business, trade and investment.

As the president of the Australian Business Summit Council Inc. for the second year running, Dr Frank Alafaci commended this eminent forum’s tireless efforts and activities to promote business growth down under and economic relations between the Australian domestic market and the international business community. Indeed, the association has been extensively promoting bilateral trade, investment and innovation that are diversifying into high value-added and technologically advanced sectors and industries through both large-scale domestic and offshore provision of cutting-edge management, infrastructure, and services capabilities. Pursuant to its well-grounded goals, the organisation will continue to provide enlightened views, opinions and suggestions through its seminars, conferences, debates and discussions, MOUs, networking sessions, EXPOS, newsletters and publications, trade delegation meetings and economic roundtables on formulating comprehensive policies, measures and practical recommendations to enhance Australian commercial ties with our established regional trading partners as well as identifying lucrative trade and investment prospects within hitherto untapped extraterritorial economic environments.

Heading the keynote speeches at the Annual Gala Dinner, H. E. Dr Alexey Pavolvsky, the Ambassador of the Russian Federation reviewed the economic links between Australia and the Russian Federation, surveying the road ahead for more auspicious trade and investment exchanges between the two countries that have been undermined in recent years by diplomatic tensions. His Excellency lamented the unfortunate campaign of bias and misinformation in some domestic and international circles against the Russian Federation – an economic powerhouse that is willing to smooth over its differences with established and potential commercial partners, while undertaking concrete measures to develop an effective vaccine to facilitate the international economic recovery from the COVID-19 pandemic. Notwithstanding this, His Excellency listed Australia among the Russian Federation’s principal trading partners with our nation well-equipped to provide innovative specialised equipment, industry skills training and advanced technology to address the Russian Federation’s infrastructure problems, and proactive collaboration with the Russian Federation’s energy and resources industries to enhance the production levels, operational efficiency and safety practices of that country’s minerals exploration through optimum Australian mining hardware and technological capabilities. As His Excellency likewise observed, both countries are integral members of the G20 (the twenty most industrialised economies in the world) and the ASEAN Regional Forum, and the Asia-Pacific Economic Cooperation (APEC) grouping, and the East Asian Summit and the Asia Europe Meeting, which presents extensive possibilities to ameliorate trade and investment relations through significant initiatives, including METS missions from Australia linked to Mining World Russia, and special Russian Federation trade and investment delegations to our shores, as well as Austrade education missions to the Russian Federation.

ABSC Inc. president, Dr Frank Alafaci likewise formally recognised the prominent corporate members, SME members and individual members who have contributed to the organisation during what has been, for obvious reasons, an extraordinarily uneventful year, which includes the most recent corporate recruit, Arc Energy Group, presenting a Certificate of Acknowledgement to Mr Fred Faker, the Founding Director of Arc Energy Group on behalf of this robust, versatile and well-known renewable energy business.

Mirroring the raison d’etre that underpins the Australian Business Summit Council Inc., EKONOMOS, Issue 2, 2020 amounts to a veritable tour de force that covers an extensive gamut of significant issues related to public and private policy making, commerce and entrepreneurialism. Indeed, the second issue of this excellent magazine, like its inaugural edition published in the previous year to celebrate the first anniversary of the association’s registration with NSW Fair Trading, enhances the Australian Business Summit Council Inc.’s presence and credentials in domestic and international business quarters as increasing multilateral trade and investment opportunities for our country’s economic growth.

Networking opportunities were plentiful during the Annual Gala Dinner, especially after the conclusion of the event’s formalities. Following an official photo taking session and the distribution of multiple copies of EKONOMOS, Issue 2, 2020 to the VIPs, diplomatic officials and guests, ABSC Inc. president, Dr Frank Alafaci expressed deep gratitude to the association’s Board of Directors for their support and confidence in his leadership, and heartfelt appreciation to the organisation’s members and sympathisers within the business community, as well as to everyone who graced the Annual Gala Dinner with their presence, including Mr John Jeoung (Founder / Chief Executive Officer, Mickle Productions Pty Ltd) – the ABSC Inc.’s professional photographer and video recording specialist; Impact AV Australia which provided the sound system for this unforgettable celebration; and the events management team at The Waterview in Bicentennial Park, particularly Mr Gilbert Khoury, the Associate Director of Sales and Ms Kirsten Gaston, the magnificent reception venue’s Business Event Manager.