WHEN WILL SOME GUN LOBBIES , NATIONAL RIFLE ASSOCIATION AND OWNERS SAY ENOUGH  IS ENOUGH TO WHAT IS HAPPENING IN THE USA?

Presidents aren’t just political leaders. They’re paternal figures. George Washington was called “the father” of our nation. Lincoln was known as “Father Abraham.” These intimate designations speak to the close bond many Americans have traditionally forged with their presidents.

Obama, though, has long struggled to be accepted as “one of us” because he is so different from his Oval Office predecessors. Some critics have tried to turn his uniqueness into a political liability. The accusations — of being a socialist, of not hailing from “real America,” the birther conspiracies — all convey a suspicion that Obama is an interloper in the White House.

dinner that “I do not believe that the President loves America.” 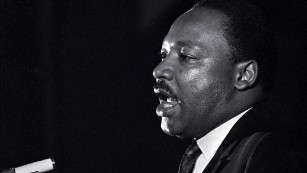 King’s eyes appeared to tear up during his “mountaintop” speech the night before he was assassinated.

That claim, though, won’t carry the same sting in the wake of Obama’s tears over the death of American schoolchildren, says Podair, the Lawrence University historian.

Here was a black man weeping over the murder of white children. Though Obama also invoked black children struck down by violence in Chicago in his speech, Podair noted that the moment the President broke down is when he cited the shootings of children at a predominantly white

At that moment, Podair says, Obama stopped being the Oval Office interloper with the funny name.

The moment is also major because of how America has traditionally viewed black men, Podair says. They have long been viewed as “The Other” — the Great Criminal Menace, the Great Athlete, the Great Entertainer.

But Obama was just a man and a father when he cried, Podair says. Any ordinary person could relate to what he was feeling.

And for a black man to be ordinary in America is, well, extraordinary, Podair says.

“He’s not ‘The Other’ anymore,” Podair says. “He’s us, and in many ways, that’s Obama’s greatest triumph.”

It was one of George Washington’s greatest moments. And it took place away from the battlefield.

American troops were on the verge of mutiny in the waning days of the Revolutionary War. They were angry because Congress had failed to deliver back pay and pensions. About 500 officers organized a meeting to discuss whether troops should seize control of the new government. 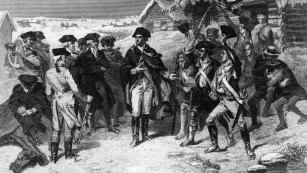 George Washington disarmed a mutiny with a display of emotional vulnerability.

Washington heard of the meeting, showed up and asked for permission to speak. He told the troops they had legitimate claims and that Congress would eventually honor its promises. Then he did something unexpected. He opened a letter to read but hesitated. No one knew

what was wrong until Washington pulled out a pair of spectacles that many officers never knew he owned.

“Gentlemen,” he said, “you must pardon me, for I have grown not only gray but blind in the service of my country.”

The officers were disarmed. Some openly wept. Their anger turned to shame. Mutiny over. Washington’s appearance lasted about 15 minutes, but it saved American democracy.

He demonstrated that a president could survive by showing emotional vulnerability, if he did it the right way, says William G. Howell, a presidential historian and political science professor at the University of

“He was conveying vulnerability borne of great sacrifice,” says Howell, author of the forthcoming book, “Relic: How Our Constitution Undermines Effective Government — and Why We Need a More Powerful Presidency.”

Historically, politicians feared expressing too much emotion like athletes feared knee injuries: They could end their careers.

The late Sen. Edmund Muskie’s presidential campaign was doomed in 1972 when he allegedly cried while publicly defending his wife from a newspaper attack during a New Hampshire campaign stop.

And former Democratic candidate Howard Dean’s Oval Office ambitions were doomed by his infamous “scream” during a raucous campaign event.

Obama, however, showed that a politician could both publicly cry and show strength at the same time, Howell says.

“Presidents get in trouble when they appear to be on their heels or aloof or disaffected. This was the antithesis of that,” Howell says. “This is not a president out of control. This is a president who is conveying dogged resolution.”

Amid his tears, Howell says the President made a subtle argument. He said that just as the Constitution gave Americans the right to bear arms, it also gave them the right to peaceful assembly,

life, liberty and the pursuit of happiness — rights that were robbed from victims of gun violence.

“He’s vulnerable plus determined. He’s expressing anger but staking out constitutional rights,” Howell says. “It seems incredibly heady, but there is this deep expression of heart that’s being conveyed as well.”

How the President acts has an impact beyond politics, says Podair, the Lawrence University historian. 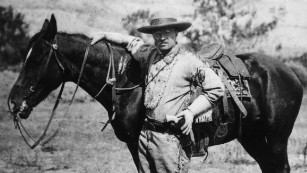 Theodore Roosevelt set the tone for men around the turn of the last century with his emphasis on the outdoors.

He says American men often get their cues on masculinity from presidents. Theodore Roosevelt’s “strenuous life” — his emphasis on hunting, adventure, being “in the arena” –

– inspired American men who feared they were going soft as more of them moved to cities at the turn of the last century. John Kennedy inspired an entire generation of men to stop wearing hats in public, and his wry, detached demeanor shaped masculine culture in the early 1960s, Podair says.

Obama did the same for politicians and men when he wept this week, Podair says.

Obama’s tears may fade from the news cycle. But he’s already suggested the moment won’t fade from his memory. During a town hall meeting on guns hosted by CNN, he said he was surprised by his tears. He also said he will continue to push for more gun control, regardless of the political costs.

“It’s the only time I’ve ever seen Secret Service cry on duty,” Obama says of his visit to Newtown, Connecticut, after the Sandy Hook shooting. “It continues to haunt me. It was one of the worst days of my presidency.”

Tuesday may turn out to be one of the more unforgettable days of his presidency. A president showing he’s not an all-powerful action hero, a black man weeping over white children, a politician changing the rules about public tears — perhaps something new did take place this week.

Obama’s critics have long said he is a radical, someone new to America, someone who is different from his Oval Office predecessors.

At least this week, they were right.

The “Narrow Gate” is not for you

No more white gloves: how Brisbane’s Trace is taking art out of the galleries

Inspiring Hairstyles For Women Over 50

OVER HALF OF THE SOUTH SUDAN CHILDREN ARE NOT IN SCHOOLS
Why corruption is holding Africa back and what should be done and by who?

The “Narrow Gate” is not for you

No more white gloves: how Brisbane’s Trace is taking art out of the galleries

Inspiring Hairstyles For Women Over 50

Five ways to have a stress-free morning

Five ways to look after your joints