A Buddhist Monk is critically ill after setting himself on fire 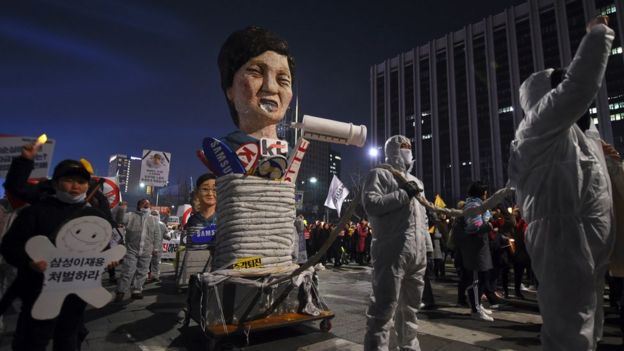 A Buddhist monk is critically ill after setting himself on fire in protest at a 2015 deal between South Korea and Japan over wartime sex slaves.

He set himself alight during a protest against President Park Geun-hye and left a note accusing her of “treason”.

The march in Seoul marks the 11th week of rallies against Ms Park, who has been embroiled in a separate scandal.

So-called “comfort women” from South Korea who were forced to work in Japanese military brothels during World War Two.

In 2015 the countries agreed that compensations and an apology would “finally and irreversibly” resolve the matter.

But critics have said the deal does not go far enough in holding Japan responsible for wartime abuses.

Tensions between the two countries increased on Friday after Tokyo withdrew its ambassador to South Korea in a row over a statue representing sex slaves.

Japan said the 1.5m-tall (5ft) bronze statue depicting a young, barefoot woman sitting in a chair, was a violation of the 2015 agreement.

On Sunday Prime Minister Shinzo Abe demanded the removal of the statue from outside its consulate in the South Korean city of Busan.

“The South Korean side should show its sincerity,” he said on Japanese TV. He said the 2015 agreement should be implemented regardless of leadership change as a “matter of credibility”.

At the time of the deal, 46 former “comfort women” were still alive in South Korea.